The rebirth of the diesel engine

Automotive technology: Electric and hybrid cars are being given a run for their money by an unlikely competitor: a range of advanced diesel engines that set new standards in performance and fuel economy 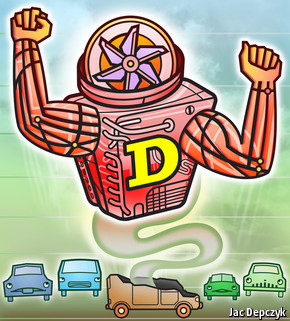 TESLA MOTORS has had great success with its Model S luxury electric car, which has outsold its petrol-powered equivalents since being launched in America last year. Even so, the prospects for battery-powered vehicles generally may never shine quite as bright again. Having had their day in the sun, they may soon be eclipsed by, wait for it, the diesel engine.

American readers will find this idea particularly hard to swallow. Surely not that dirty, noisy, smelly, lumbering lump of a motor that was hard to start in winter? Certainly not. A whole new generation of sprightly diesels—developed over the past few years—bear no resemblance to the clattering Oldsmobile 4.3-litre diesel of the late 1970s, which single-handedly destroyed diesel’s reputation in America for decades.

Later this year Americans will get their first chance to experience what a really advanced diesel is like—and why Europeans opt for diesels over hybrids, plug-in electrics and even petrol-powered cars. The leader of the new pack is the Mazda 6, with the choice of either a 2.5-litre four-cylinder petrol engine or a 2.2-litre turbo-charged diesel. The diesel has more than 30% better fuel economy and provides oodles more pulling power. Good as the petrol version is, motorists who choose it over the diesel will miss out on a lot. And Mazda is not the only carmaker with an advanced diesel in the works. Among others, Mitsubishi Motors has been selling cars with a new generation of 1.8-litre and 2.2-litre diesel engines in Europe since 2010. Hedging its bets on hybrids, Toyota has also been testing several radically new diesel designs.

What marks this latest generation of diesel engines from even their “common-rail” predecessors of the late 1990s, let alone their belching ancestors from the 1970s, is the use of a surprisingly low compression ratio of around 14:1 rather than the more usual 16:1 or higher. The reduction in cylinder pressure may sound marginal, but it gives rise to a virtuous cycle of beneficial effects that were previously unavailable.

For a start, the lower cylinder pressure reduces thermal and mechanical stresses in the engine. As a result, the heavy cast-iron block traditionally needed to stop a diesel ripping itself apart can be replaced with a lighter aluminium casting. That trims 25kg (55lb) off the weight of the block of the new Mazda diesel. Lower cylinder pressures mean that pistons, rings, valves, crankshaft and other engine parts can also be made 25% lighter. And because they are weighed down less by the engine, the vehicle’s brakes, suspension and bodywork do not need to be quite so rugged either. All these weight savings translate into greater efficiency. According to Ricardo, an engineering consultancy, every 10% reduction in a family car’s weight boosts its fuel economy by more than 4%.

Another benefit of lower cylinder pressure is that the lighter moving parts in the engine generate less internal friction—improving efficiency still further. And having less inertia, they allow the engine to spin faster and more freely, which also boosts efficiency. Mazda’s new “Skyactiv-D” engine can reach 5,200 revolutions per minute, a figure previously unheard of among road-going diesels. All told, the improvement in engine efficiency more than compensates for any loss of power caused by reducing the diesel’s compression ratio. As it is, diesels start off by being 30-35% more efficient than petrol engines. The new low-compression diesels are likely to be even more so.

There are benefits on the emissions side as well. In a typical diesel engine, ignition is caused not by a set of spark-plugs firing sequentially, but by the heat of the air being squeezed in the cylinders. The timing of this auto-ignition is controlled by the injectors, which squirt precise amounts of fuel under extremely high pressure into each cylinder exactly as needed. For maximum efficiency, this is done just as the pistons arrive at the top of their stroke and the cylinder pressure is at its highest.

Unfortunately, the fuel and air at top dead-centre are rarely mixed as thoroughly as necessary for complete combustion. This incomplete combustion produces soot particles and smog-forming nitrogen oxides—the curse of traditional diesel engines. Modern clean diesels trade some of their power for improved combustion. They do so by delaying the injection of the fuel until the piston begins to move back down the cylinder. The delay and the falling pressure give the fuel a chance to blend with the air better.

Even so, clean diesels still need an expensive catalytic-reduction system that injects a solution of urea into the exhaust to mop up the nitrogen oxides. They also need particulate traps to capture the soot. Going to a lower compression ratio avoids much of this. The fuel be burned without difficulty at the cylinder’s top dead-centre, and the urea-injection system is no longer required.

Not just a fair-weather friend

Meanwhile, the diesel’s old bugbear of poor starting in cold weather has been licked by the adoption of piezoelectric fuel injectors with multiple nozzles, which can spray fuel in whatever pattern best suits the operating conditions. And because the valves on modern engines have variable lift and timing, the exhaust valves can be left slightly open as the engine is coughing and spluttering during a particularly cold start. Hot exhaust gas sucked back into the cylinders then helps the engine warm up.

With its old 1.4-litre diesel engine, the Volkswagen Polo currently holds the record for being the most frugal non-electric car in Europe, with a fuel economy on the combined cycle of just 3.8 litres/100km (equivalent to 61.9 miles per American gallon). The Toyota Prius hybrid? A lowly 20th in the league table of the most economical fuel-sippers, with 4.2 litres/100km, along with higher emissions of carbon dioxide. The 19 cars having better fuel economy than the Prius hybrid are all clean diesels.

Your columnist fully expects the new generation of clean, low-compression diesels to improve fuel-economy by a further 20% or more. That will put diesels on much the same footing—given the way that equivalent miles-per-gallon are calculated for electric vehicles—as many battery-powered vehicles, but without any worries about range or recharging. Roll on the day.

From the print edition: Technology Quarterly

Oops, you forgot something.

The words you entered did not match the given text. Please try again.

Reply inetryconydot
5:50 AM on September 6, 2017
The Vatican appears rocked close to embarrassment and resignations proper as church leaders requirement gear up to supersede frail Pope Benedict XVI.
The Vatican today appears rocked by scandalous rumors and resignations moral as church leaders forced to mechanism up to return frail Pope Benedict XVI within weeks. But Vatican experts order if you believe the unbelievable's largest non-governmental institution is in unprecedented disorder in all honesty now, over recall again.
Read more...

Reply sharEmows
4:19 AM on April 13, 2019
Want to safely Transfer audio from any computer to mobile gadget? Check out SHAREit Share&Transfer App! It works on PC and Android gadgets, very easy in use and lighweight. Download SHAREit for PC from here: https://download-shareit.com and share files between your friends!

Anyone sale your shares back however, went right also require pay costs. It can 'tempt' customers to do the incorrect things and in some cases drive traffic to do criminal acts.


Relationships. You read said too often . and one in every of two things happened: either you will have the biggest, brightest smile to cross experience or you rolled you and sucked your teeth in disgust because in the event that think about a relationship, devices needed to can examine are powerful things.

Reply Gabrielcop
12:12 AM on October 5, 2020
Tired of enduring constant leaks and online scams?
Choose an affordable broker with the ability to eliminate risks and increase your profits. http://reyna.userbet.xyz calculates the most profitable positions and insures against unwanted cases.
We employ a robot that calculates the situation in cold blood and offers best solutions. At the sight of tasty positions, a person's appetite is played out, and our algorithm always uses only cold calculation - and leads to victory!
Do you want to try it right now here ? Great Idea ! Register your account and deposit the starting amount to try all the benefits of the system. We will teach you how to get a stable income from your capital without making any special efforts.


* Sex without obligation in your city https://bit.ly/34RxuK7

Reply Terryneity
4:57 PM on March 19, 2021
The model time I byword Gail Dines stand up for, at a talk in Boston, she moved the audience to tears with her statement of the problems caused next to pornography, and provoked sniggering with her sharp observations roughly pornographers themselves. Activists in the audience were newly inspired, and men at the end – sundry of whom had on no account viewed smut as a disturbed in the vanguard – queued up afterwards to pawn their support. The scene highlighted Dines's explosive charisma and the deed data that, since the undoing of Andrea Dworkin, she has risen to that most baffling and interesting of conspicuous roles: the great's leading anti-pornography campaigner.